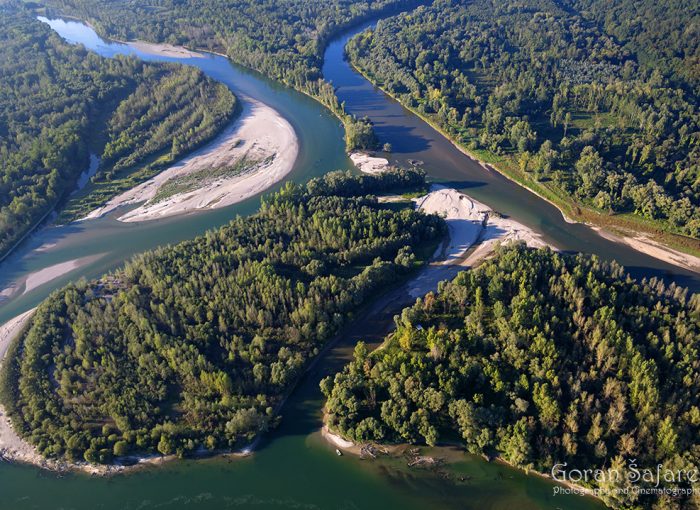 The Drava River is one of the last remaining lowland rivers in Europe. In Croatia and Hungary, it is largely free from dams and excessive regulations and harbours great biological and landscape diversity. Its natural meandering dynamics constantly recreates gravel bars with pioneer plants and birds that nest on the bare stones, steep banks where sand martins, kingfishers and bee-eaters dig their long tunnels for nests, side-branches, where carps spawn and black storks hunt. The wide floodplain is a home to deer, eagles and countless insects and other organisms.

The Drava River is on our list of TOP 10 nature of Croatia, also one of Croatian beautiful rivers.

Drava is a long river, stretching through five Croatian counties. It is a border with Hungary most of its course. The biggest cities are Varaždin and Osijek.

The River Drava: it’s like a metaphor for a whole segment of Central Europe, connecting countries and cultures in its 720km course from the Alps to the Danube, and reflecting many major historical changes of the last few centuries. This great European river rises as a tiny spring amongst the pinkish rocks of the Italian Alps in Sud-Tirol; flows through the long, scenic, Pustertal valley in Austria, where it is enlarged by the rivers Isel and Möll, and spills out of the hills of Slovenia, down onto the classic Mid-European floodplains of Pannonia. Here it flows across Croatia and the southern border of Hungary, collecting the waters of the River Mura on its way, and joins the mighty Danube near the city of Osijek.

Much of the Drava has been tamed and shaped by human influence: upstream of the Mura confluence there are 22 hydro-power dams tapping the energy of the river. In the steep-sided parts of the Drava valley the effect is not so dramatic, but on the Pannonian Plain in Slovenia and north-western Croatia the power-plants need diversion canals and long, high-sided, reservoirs, which mar the landscape and disrupt nature.

Downstream of Barcs, the Drava was regulated for shipping, especially in the Nineteenth Century, and the meanders and many side-branches were cut off; but the Lower Drava still has many of the natural features of a broad lowland river, with islands and riparian forests. And in some parts nature continued to rule: in the interfluve between the Drava and the Danube lies the rich wetland of Kopacki rit, the ‘pearl of the Drava’. Between the Mura confluence and the Hungarian city of Barcs the Drava is almost pristine: hardly a settlement to be seen, the river a maze of gravel banks and islands, side-branches and channels, dynamic, ever-shifting, a haven for wildlife. This is the land of the Podravina, the ‘lands beside the Drava’.

Human culture shapes nature, but is in turn moulded by it…all along the Drava, communities adapted to live with the river: their settlements, farm management and lifestyles developed to accommodate the annual flood-patterns and make the most of the bounty of the Drava: the fish and the reedbeds, the wildlife and waterfowl, the fertile sediments and the rich wetland forests. Unique customs and traditions developed in distinct regions, such as the Ormansag in Hungary and the Podravina in Croatia, and many of these traditions have lived on, at least in folk-memory, despite the river regulation and the inevitable march of history.

Time and the river flow slowly but inexorably, and history left its mark upon the Drava. In the past the border between Croatia and Hungary was more open, more permeable, and people crossed freely, made marriages and owned lands on the other side. The legacy is that now there are villages in Hungary where many people – in one case, Felsoszentmarton/Martinci, even the majority – are Croatian and speak the Croatian language; on the Croatian side there are places where the Hungarian language is common.

Sunrise scenes with raditional music from the region.

This border itself is a remarkable historical artefact: drawn up along the river’s course a thousand years ago, it has remained the same although the river has shifted and been straightened. The frontier now lies across the landscape like a memory of the old meandering river, with enclaves of Croatia on the ‘Hungarian’ bank, Hungarian territories on the other side. During the latter half of the Twentieth Century, the years of Communism, this was a part of the Iron Curtain, a no-go area for both sides, and nature thrived in the absence of human development.

Drava is well documented in naive paintings. Famous painter Mijo Kovačić wrote this: The Drava was my cradle. There was water everywhere, and water means life. Quite a number of people lived off the Drava – those who caught fish, those who made wicker baskets from reed, gathered wood, caught crabs and small animals. The river was generous, and poor people were happy to take everything that it offered. Such was the life along the Drava. The marshlands appear to me like a magic garden: I find everything interesting there – every bush, every water lily, every flower. The place is teeming with frogs, turtles, grebes, herons, beautiful fishes. And the light… In the marshland, everything is clearly visible – every reed, every flower, every frog, every fish under the surface.

The Drava is at the same time gentle and dangerous. We have a saying that water is a good servant but a bad master. In most of my paintings it is depicted as good, calm and tame. And this is what it is. It is seldom evil, but when it is, it gets truly vicious, the worst possible master. At such moments, the scene resembles that of the Biblical Deluge, the end of the world”.

The Drava River is also the backbone of the planned 5-country Transboundary UNESCO Biosphere Reserve “Mura-Drava-Danube”, which, once established, will be Europe’s largest riverine protected area (700 km) and the world’s first penta-lateral (Croatia, Austria, Hungary, Slovenia and Serbia) UNESCO Biosphere Reserve. Moreover, the project area and its surroundings contain the largest freshwater reservoir in overall Croatia.

It is possible to see the river on many places, coming with the car. One of te best place is Legrad at the Mura-Drava confluence. The most beautiful and the most preserved stretch is in Koprivnica county, From the last dam until Virovitica. Križnica near Pitomača is small Croatian enclave – you ca cross the river on a pedestrian bridge and a small ferry (20kn).  The best experience n the river is by canoe or kayak. Unfortunately, there are just a few organised tours on the river. Border police permit is necessary from the Mura confluence – could be obtained from Koprivnica police or contact me. Mail me for all other inquiries.