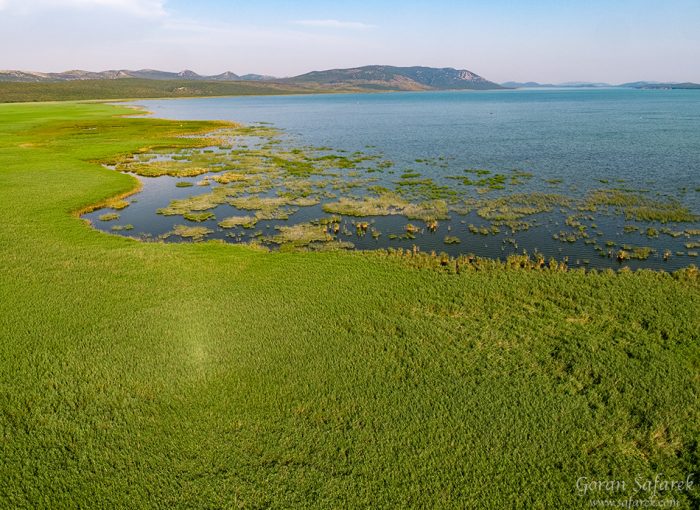 The Vrana Lake is an oasis not only of freshwater but also of Dalmatia’s biological diversity. As little as 800 metres away from the sea and the closest beach, it’s the largest natural lake in Croatia. Today, it’s become a tourist attraction that has been preserving its cultural and natural treasures well.

A view of Dalmatian karst landscape, sharp stones, and dry, thorny bushes arouses a feeling of uneasiness within those who’s unaccustomed to walking on such terrain, yet reaching the Kamenjak Lookout brings relief affording a stunning view of the vast expanse of the Vrana Lake (Vransko jezero in Croatian). After a narrow strip of land, the view stretches further to the indented coastline of the Adriatic spotted with islands, of which the Kornati form a bare stone wall facing the open sea. Down at the foot of Kamenjak, karst terrain comes face-to-face with a wide belt of vast reedbeds that, in places, enter the shallow waters of the lake. This Mediterranean reedbed belt is protected as a nature park and is included in the Ramsar List of Wetlands of International Importance.

See other national and nature parks in Croatia

The largest natural lake in Croatia

It’s easier to appreciate the Vrana Lake’s vast, 30.2-square-kilometre surface, making it the largest natural lake in Croatia – while standing on Kamenjak Hill’s prominent lookout point facing the sea. From this elevated position, you’ll also clearly see the lake’s elongated shape. Stretching along the coast of the Adriatic from the town of Pirovac in the south to the town of Pakoštane in the north, it’s 13.6 kilometres long and only 1.4-3.4 kilometres wide. In some places, as little as an 800-metre strip of land separates it from the sea, so it may appear as if the Adriatic has overflowed into it, creating a closed lagoon of sorts. But this is not the case. The presence of reeds, sedges, and other wetland plants indicates that freshwater runs the show here. 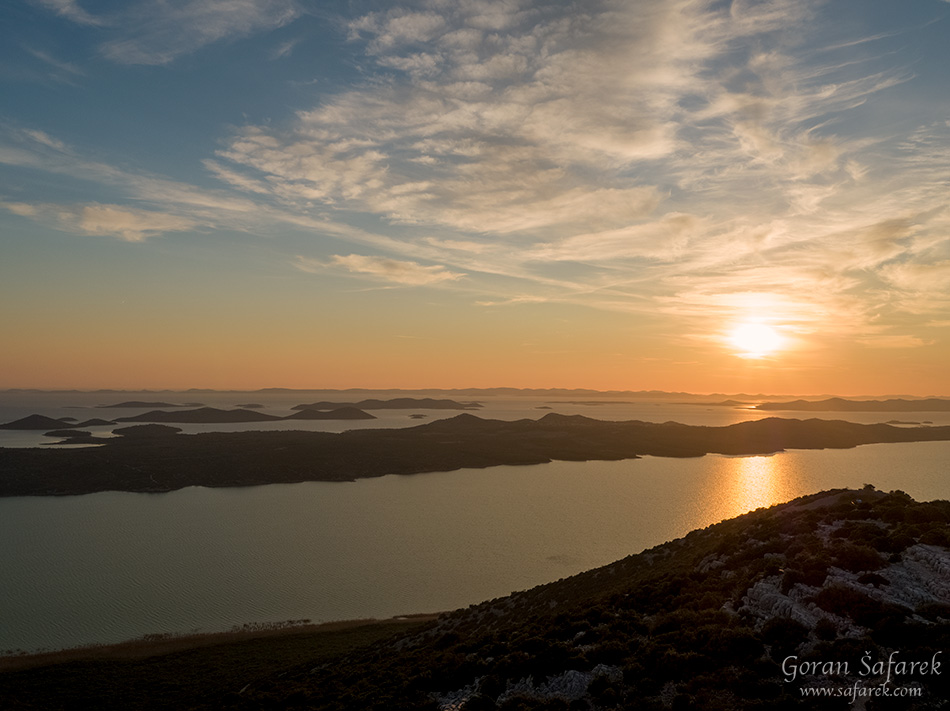 The Vrana Lake is, in fact, a submerged karst field. In other words, it came into existence thanks to the waters from the wider surrounding region of Ravni Kotari flowing into a karst field, the lowest point of the area. Given that, on average, the lake is two metres below sea level, it’s also a crypto depression.

If you taste the lake’s water, you’ll notice that it’s slightly saline. That’s because the lake is in contact with the sea, which passes over and through a porous limestone reef. This contact between the lake and the sea is particularly strong in Prosika, in the south-easternmost part of the lake. At Jugovir, the sea penetrates the lake during strong southerly winds, and even more so when the lake’s low water levels and the sea’s hide tide happen to coincide.

Paradise for the birds

Most people first think of birds when Vrana Lake is mentioned, and not without reason. Part of the reedbed in the north-western part of the lake has been a bird reserve since 1983. Here, ornithologists counted as many as 255 different species of birds, of which 102 species nest within the bird reserve. This is the only remaining nesting place in Croatia for the pygmy cormorant and the purple heron that builds its nest in the dense reed, hidden from view. Besides these two species, another 13 species of birds come to Vrana Lake. Their populations are significant nationally and internationally, species such as the squacco heron, the Eurasian bittern and the moustached warbler.

In late summer, in autumn, and spring, when birds start migrating, the sky above the Vrana Lake is at dusk sometimes covered by vast flocks of swallows, common starlings and other birds, as many as 140 species. During the season of bird migrations, the Vrana Lake is home to 20,000 to as many as 200,000 feathered fliers each day. Numbering more than 100,000 a day, waterfowls arrive to spend the winter in the warmer regions of the Mediterranean, flying from the frozen lakes of the continent. At times, over 140,000 Eurasian coots can gather, their black bodies completely obscuring the lake’s surface while the whistling of birds echoes across the entire lake.

Spending their holidays in nearby tourist destinations, such as in Pakoštane, Pirovac, Murter or even more distant places, an increasing number of holidaymakers have started to notice this natural stage. Due to the proximity of the sea and the closest beach, Vrana Lake is ideal for a day trip, particularly on cloudy or rainy days. Moreover, some choose this part of the Adriatic precisely because of the lake. Being able to change your ambience daily, such as swapping cricket-filled pine trees with heron-packed reeds, or seawater with freshwater, the many species of birds and other exciting features are reason enough for you to visit the lake. Needless to say, for birdwatchers, the Vrana Lake and its many different species of birds are of particular interest.

In spring, holidaymakers start treading the wooden footpaths through floodplain meadows and reedbeds near Crkvina and its campsite. The tops of the lake’s reed stalks reach well over two and a half metres in height, but given that the footpaths are built on poles raised because of seasonal flooding, the reeds won’t swallow you up. Blending in perfectly with the environment, the wooden observation decks offer spectacular views of the lake and birds. Prosika, Jugovir, and Kamenjak Hill also feature such educational trails; the highest points on the north side of the lake are turned into lookout points, from which most of the lake is viewable. Given that a fifty-or-so-kilometre-long bike trail embraces the lake, many visitors also come on bicycles. A real holm oak and evergreen underbrush jungle spreads at the foot of Kamenjak Hill.

Of course, birds are not the only reason to visit Vrana Lake. There are also its fish that attract fishermen. Fishing is now just a sport, but people once lived off the lake and used to be a swamp, with eel as one of the most widely fished species. This is best seen in Jugovir, where eels would set off through porous rock on their epic journey to the far-off Sargasso Sea in the Caribbean. Here, fishermen erected a barrier and built stone fish traps to catch eels in small pools. The catch of eel was guarded against theft by a guard in a fisherman’s house, a building that has been preserved to date, as well as the remains of these stone fish traps. When people earned a living out of hard work at an age before tourism, eels weren’t a delicacy but a staple and a great source of nutrients. The surrounding soil soaked with sweat yielded olives, figs and grapevine, particularly in Modrave, the southern and flatter region of the lake, which is still home to a web of dry stone walls.

Today, a great many olive groves have been taken control of by underbrush due to neglect, and hardly any bleating can be heard by either goats or sheep that once pastured in large flocks. Today, you’ll spot a few goats or sheep only on the rocky meadows near the village of Vrana, on the north-western rim of the Vrana Lake Nature Park. The village of Vrana is somehow closest to the reed, that is, the biologically most valuable region of the lake. You’re offered great views of the lake from the walls of a fortified monastery from the 10th century, first in the care of the Benedictines, and then the Templars, as well as from Mašković Han, a former caravanserai and a rare sight of Turkish architecture in Dalmatia. With a number of archaeological sites as evidence, the history of Vrana Lake here dates back to ancient times. The two towers on Osridak Hill, from which soldiers watched over the lake in turbulent times, are such sites.

Thanks to its many charms and to preserving its cultural and natural treasures well, the Vrana Lake’s become a top-rated tourist hotspot. 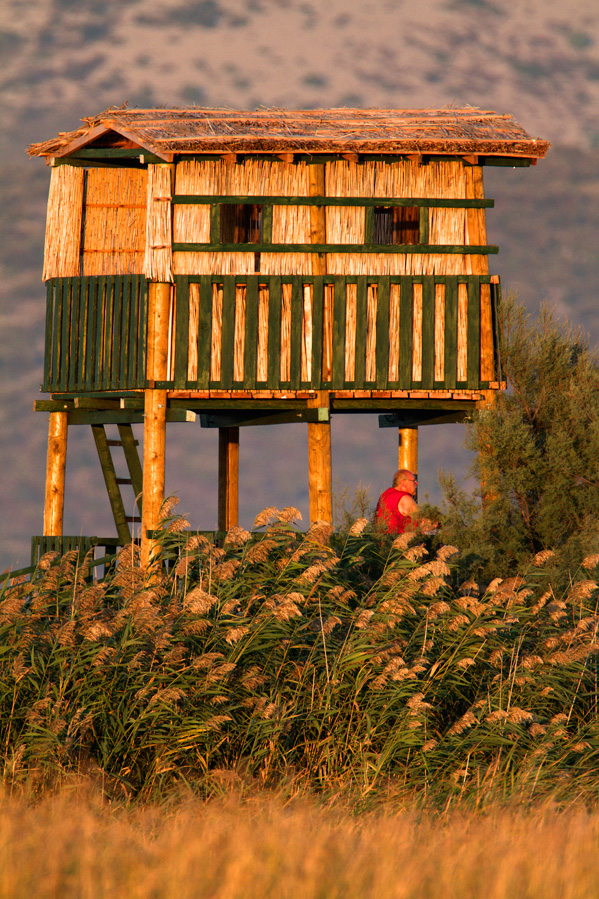 Šoderica – the lake full of life

The Cetina River – nature and adventure in interior Dalmatia