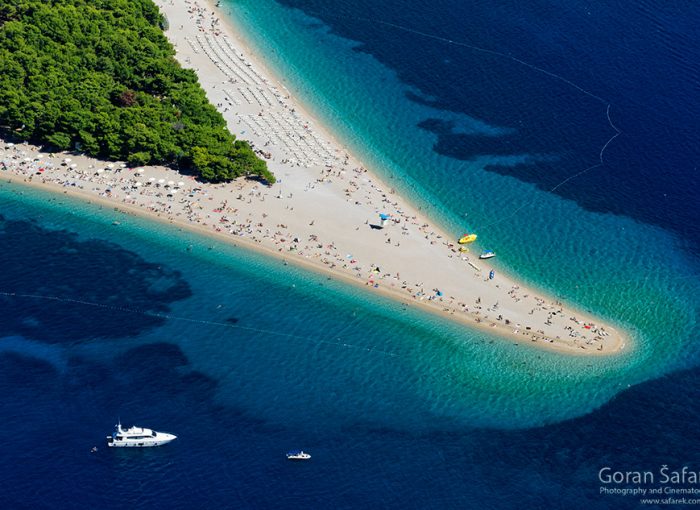 Zlatni Rat is the most famous beach on the Croatian Adriatic coast, and nearby Bol town is a significant tourist destination.

The Zlatni Rat beach is an elongated pebble tongue that sticks from the rocky coast of Brač island for almost a halo a kilometre. Interestingly, its shape changes a bit, especially its tip that could be even slightly curved. This somewhat rare feature of the Adriatic coast results from the weathering of nearby Vidova Gora hill, with 778m highest point of the island. The torrents have eroded this particular rock and brought it at the foothill, the Adriatic shore. The waves and sea tides have shaped them in their eternal cycles—constant collisions and grinding sculpted beautifully rounded pebble, so soft for walking. The bonus is that these divine beach layers cover all beaches in the surroundings.

Zlatni Rat is the highlight of them all. The pebble beach has the turquoise aura of the shallow sea that gradually become blue deep of Croatian Adriatic. The sea is amazingly clear until swimmers arrive and make it a bit murky.

Zlatni Rat is one of our TOP 10 beaches in Croatia. See them all!

The beach gets crowded at the peak of the summer season, and everybody wants to share a bit of heaven. The central part of the beach offers shade, but many opt for an artificial shade – the umbrella. The beach resonates from the indistinguishable clamour of the children having fun. The music blares from the beach bar, the easy-going and relaxing, resembling some tropical bars. Nargilas (hookas, pipes) are expensive but look after items on the beach.

This conjunction of the exotic beach and laidback atmosphere invites all sorts of partygoers and influencers. Sunset on the beach is especially magical, and most of the crowd is gone for dinner. Early hours are even better, as most tourists are still in bed after a long evening.

The old name of the beach was Dugi Rat (Long beach), but later it got the present name. At older times, the vineyards and fig trees descended almost to the beach.  Also, the region was rich with fish, so it was golden for the inhabitants, as it is today.

Those looking for the quieter beach can walk just a bit further, opposite the Bol direction and find lovely beaches under the rocky shore. Several of them are dedicated to the nudists, while others are just for everybody. Respect the nudists, and don’t go there unless you are ready to expose yourself to the sun in its entirety. There is also a small, basic camp.

Even at the peak of the summer, there’s enough parking space just near the beach. Most of the people, however, come walking from the nearby hotels or apartments in Bol town. A beautiful paved path leads you directly to the town, a 20-minute’s walk. Just strolling there is a relaxing experience. All the way is an almost continuous beach on one side and a string of hotels on the other. These hotels boast beautiful green lawns even in the summer’s growth, swimming pools, massages, spas and everything people need for a well-deserved and luxury holiday. There’s no shortage of beach bars, ice cream booths, souvenirs, restaurants in the shade of the pines.

One of the beautiful beaches is opposite of Bol town, near the Dominican monastery. The monastery itself is a historic stone building overlooking the town. It hosts some excellent pieces of art, including Tintoretto’s altar painting Madona with Child and Saints. Museum in the monastery contains a collection of prehistoric items, a numismatic collection, a collection of underwater archaeology, and other items

Lanterns’ light at dusk lit the old historic building and start inviting people to stroll, have dinner or just a drink. The town’s seafront becomes a Babylonian ant hive with so many people, where different languages mix.